Rimavská Baňa acquired city rights from the Archbishop of Kalocsa, Stephen in 1268. An early Gothic single-nave church surrounded by a Renaissance defensive wall stands above the village.

The chancel of the church with an irregular polygonal closure is vaulted with a Gothic cross-ribbed vault, the nave has a painted coffered ceiling. The original building did not have a tower, today‘s Baroque-Classicist bell tower was added atypically to the northern wall of the chancel in the 18th century. Profiled late Gothic stone portals have been preser- ved on the southern and western sides of the church, and a niche tabernacle with a Gothic lattice in the chancel. The church was originally painted inside and outside. The paintings were partially
uncovered in 1893 by I. Groh, and the
total uncovering and restoration was not carried out until 1956-1958. Paintings in the chancel have been preserved on the eastern side of the triumphal arch, partly on the northern wall and above the tabernacle. From the Christological cycle, there is a scene of the captivity of Christ in Gethsemane in the top band above the triumphal arch, with the figures of Jesus and Judas. In the left part, the apostle Peter cuts off the ear of Malchus; on the right, there is a schematic representation of the Mount of Olives. On the left side of the arch, St. George is shown as a knight in a cloak with a defeated dragon at his feet; on the right side, the patron saint of the miners, St. Barbara is depicted in the retroflex position with a tower in her hand. A series of preserved half-figures of the prophets with bands placed in quadrilobs are located in the lambris of the arch. We identify details from the Last Judgment and illusory architecture with pinnacles and crabs above the tabernacle and a naked figure with a halo – the Holy Body of Christ – on the northern wall of the chancel. The ribs of the vault of the chancel, painted with a red and white geometric ornament, converge at the top in a disc bolt with the coat of arms of Stibor of Stiboricz, son-in-law of the local landowners, the Széchényis. The best-preserved painting of the church on the northern wall of the nave shows the legend of St. Ladislaus, a dynamic composition, a celebration of heroism and knightly life.

The story begins on the left, where the walls of Oradea stand out, from behind which you can see the anxious looks of women and the mourning figure of a young maiden under the walls. A battle of Kerlés between the Hungarian and the Cuman cavalry is depicted in the middle. The author took care of the detailed depiction of the harnesses, the colour of the horses, the clothes and the headgear distinguishing the Hungarian and the Cuman armies. Although another sequel to the scene, i.e. the match of St. Ladislaus and a Cuman, Ladiva‘s help in killing him and the king‘s rest in her lap, is considerably damaged, a medieval story composed in a dramatic plot with the help of distinctive lines. The figures of saints placed in framed fields are preserved under the band of the Ladislaus legend, St. Louis with a scepter, and probably St. Elisabeth of Hungary, but another scene is considerably damaged.

Only damaged fragments of the figures of the Virgin Mary the Protectress, the Archangel Michael and St. Christopher can be seen on the southern exterior wall of the church. Most of the paintings of the church in were certainly destroyed during the occupation of the church by Hussite troops, who fortified themselves here. Their presence in the region is processed in the Slovak and Czech literature. In the interior, there is also a valuable coffered ceiling (1783), a baroque altar (1745), a baroque pulpit (1747) and a carved choirstall (1695). 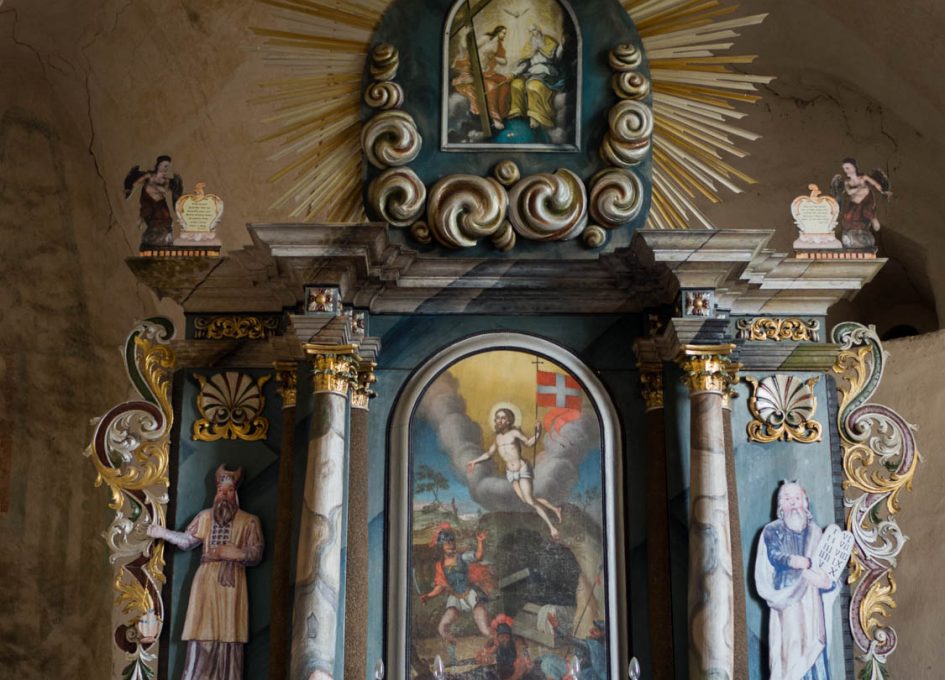 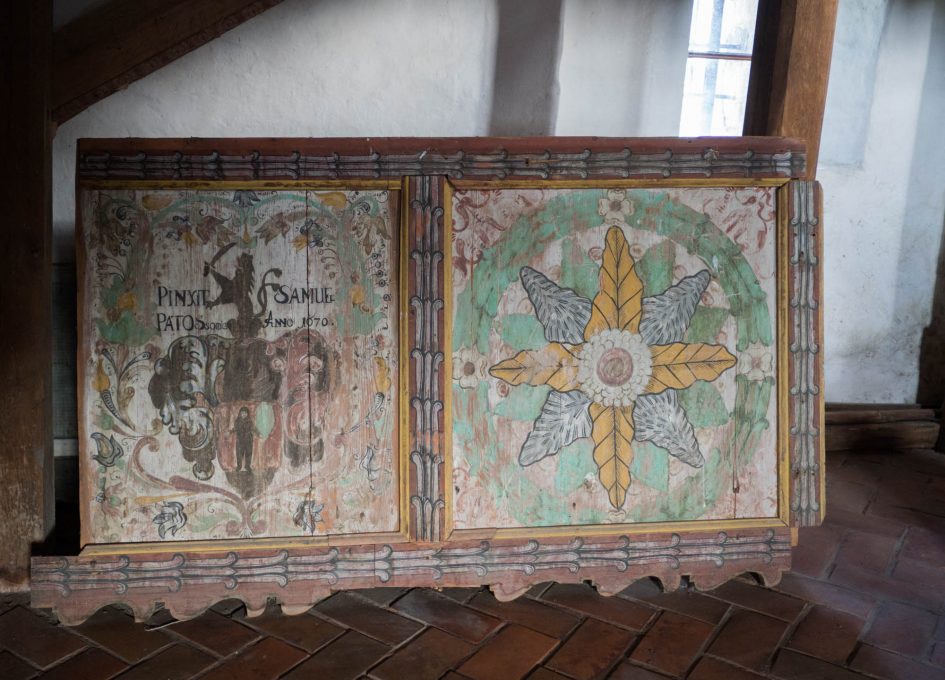 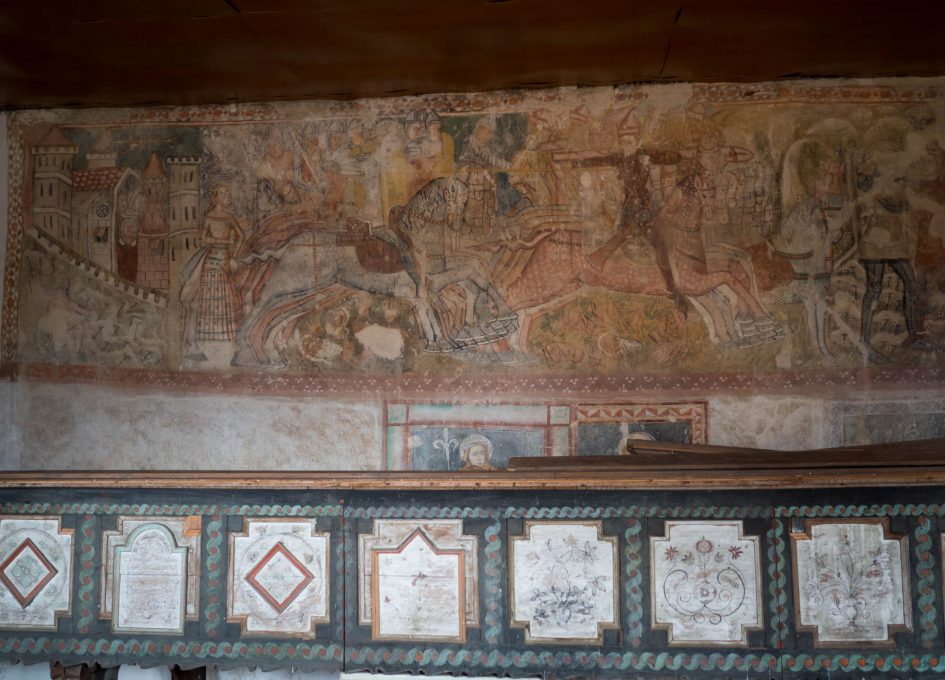 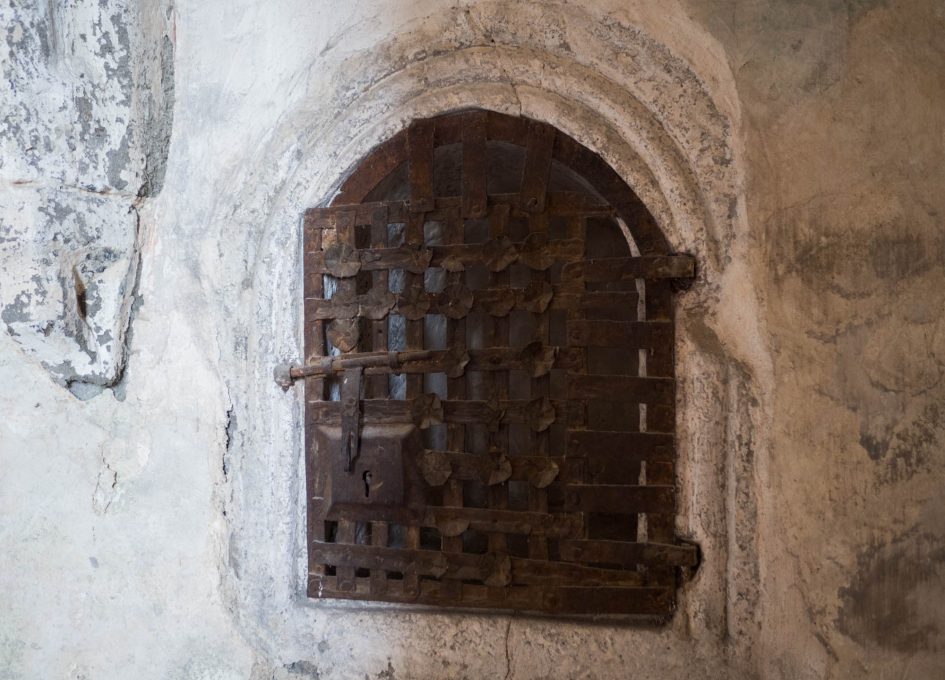 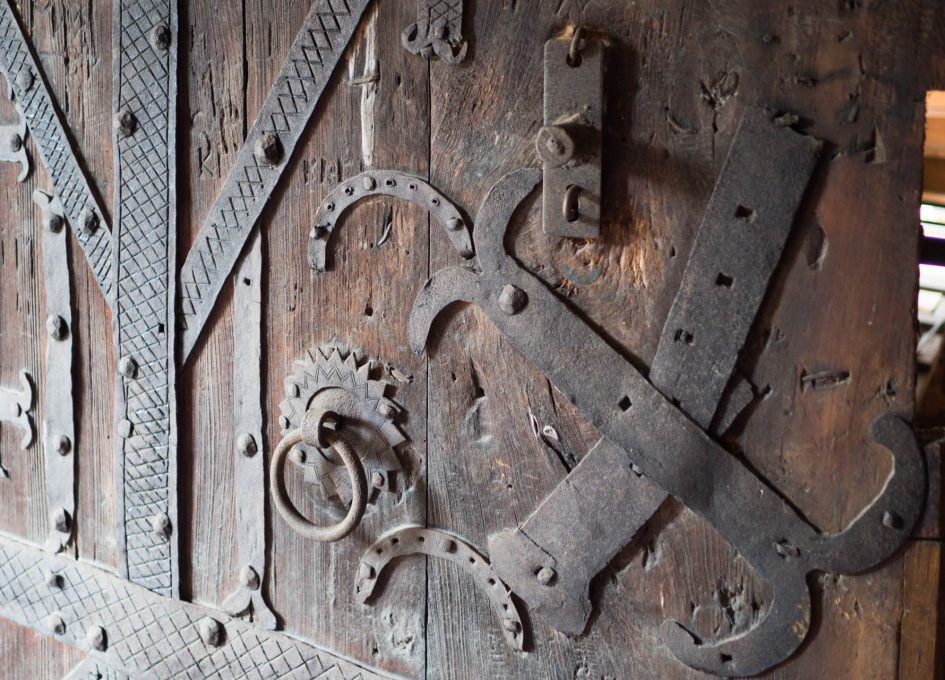 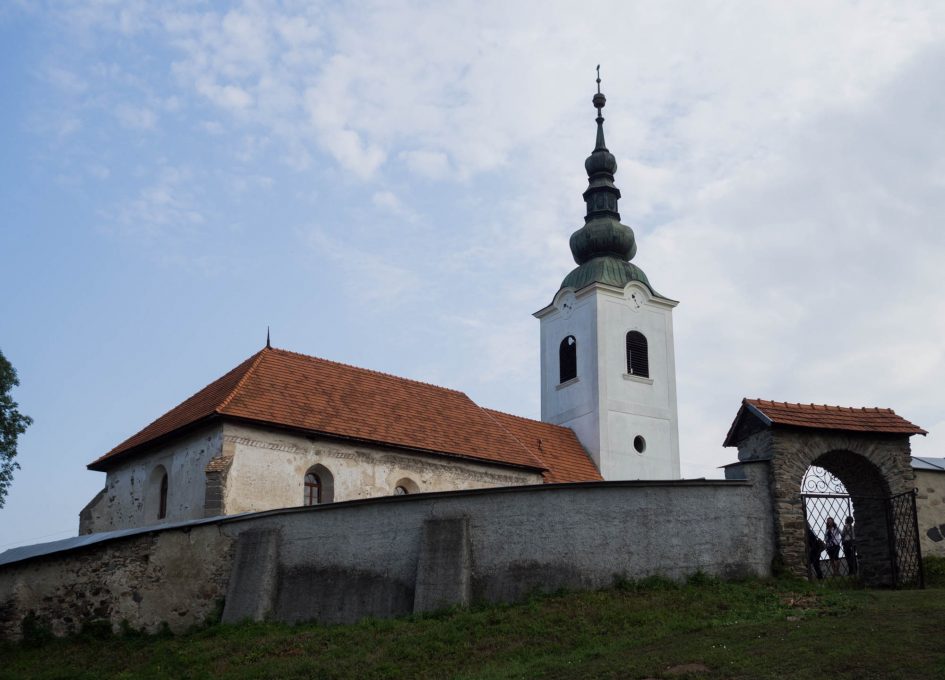 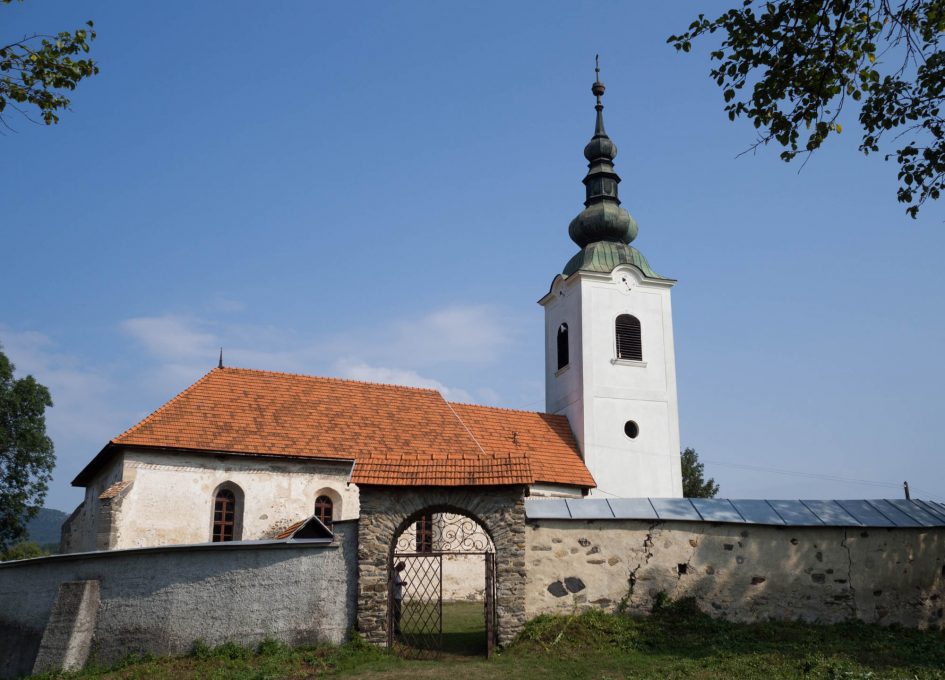 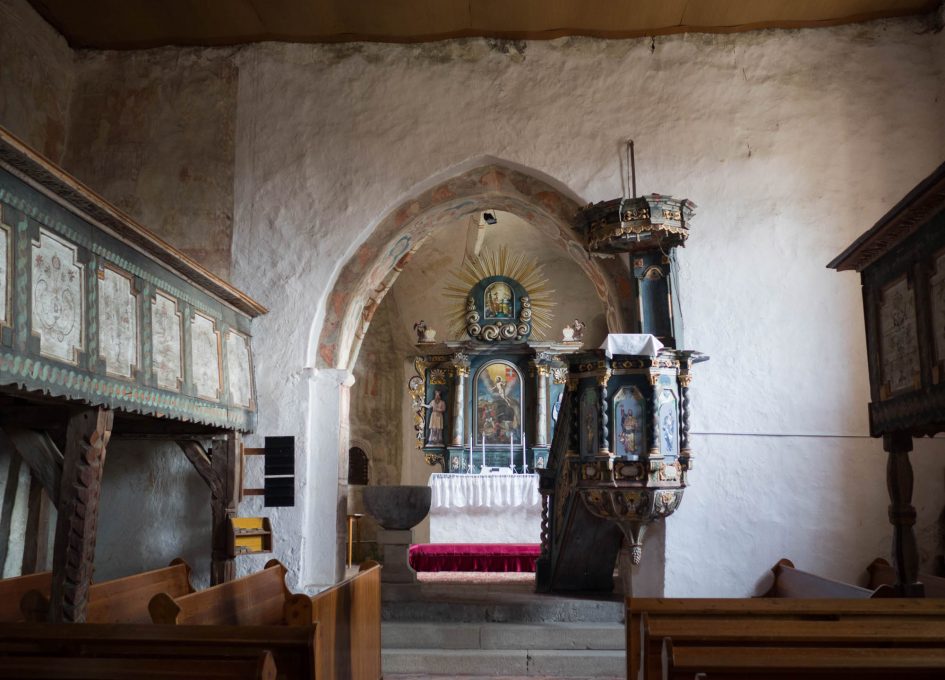 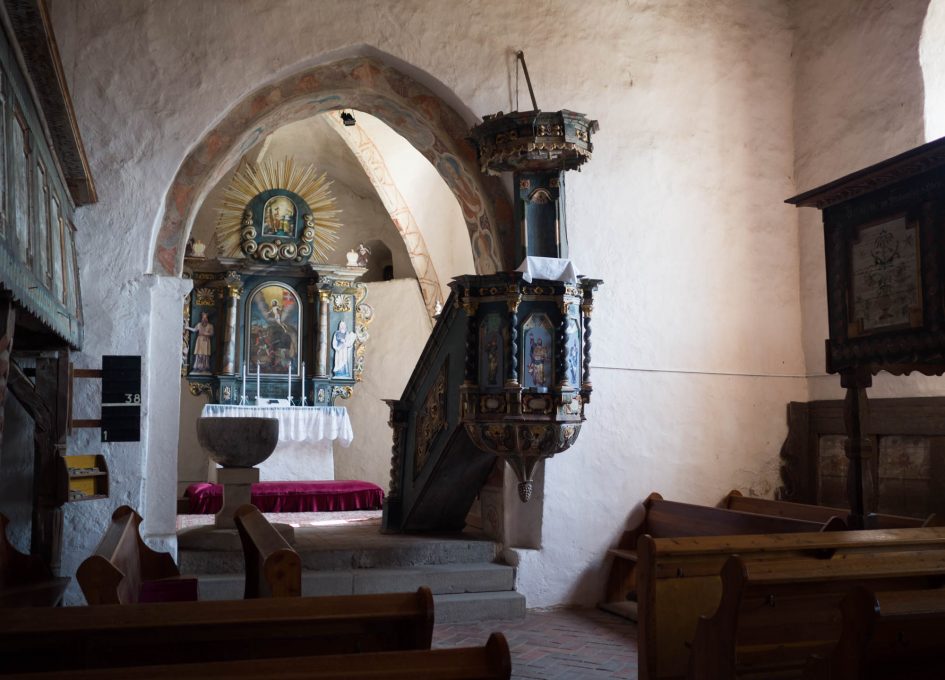