Rimavské Brezovo, like many other municipalities in the region, is associated with mining history. The originally early Gothic church, towering over the silhouette of low village houses, used to be dedicated to the Birth of the Virgin Mary before the Reformation. The name of the village was given according to the first written historical reference from the year 1334 as Brezou and, for some time, it was also the county seat of Malohont. The single-nave church was probably built in the first half of the 14th century with a square-ended chancel and a rib vault. Due to the population increase connected with the establishment of iron works facility in the village at the end of the 18th century, the church capacity was insufficient. Therefore, the largest reconstruction of the temple was undertaken in 1893. The original sacristy on the northern side was demolished, the entrance was walled and the nave was extended southwards. The older chancel thus lost its role and started to be used as a sitting space. Thanks to this reconstruction, medieval murals were found under layers of lime paint and their restoration was then devoted to I. Möller and I. Huszek. Unfortunately the work was not always done in the most sparing way. Quality interior paintings in the original Gothic section are probably the work of artists from the workshop of the Master of Ochtiná chancel. The most striking element is Christ in Glory, the figure of the blessing Christ in the shining circle with the Sun and the Moon, depicted in the eastern part of the vault. The winged lion and the golden-winged eagle on the sides symbolize the evangelists Mark and John. Opposite to them are an angel and a winged bull as Matthew and Luke. The Marian theme is elaborated in two bands around the perimeter of the entire chancel. The lower band of the northern wall belongs to the depiction of the Death of the Virgin Mary, above this composition we find a quite unique, for this region, Italian-Byzantine motif of the Assumption with the figure of Christ in the mandorla. A small child stands on his knees as the soul of the Virgin Mary, the whole scene is held by four stylized angels. Beneath the Marian cycle, the entire perimeter of the walls is painted with a template ornament, into which the strip of four-leaf-shaped medallions with heads of prophets is inserted. This part of the paintings appears to be the least affected by the re-paintings and is preserved in a very good condition and in the original colours. On the walls of the nave, due to various building modifications, the frescoes were preserved only in fragments. The most intact frescoes are on the southern part of the triumphal arch: the Christ in a mandorla, a blessing angel, or St. Bartholomew, who was skinned alive, he carries the skin on a stick. Remnants of the Christological Cycle, such as the Christ carrying the cross or the Crucifixion, were preserved on the northern wall of the nave. The southern wall was largely destroyed during the redevelopment. However, research has revealed a depiction of St. Anne as a madonna with a child in her arms, with women carrying gifts in baskets walking into her direction. They also carry young pigeons to prepare a traditional strengthening soup for the fresh mother. This scene is very likely utterly unique on the territory of Slovakia. Comprehensive restoration and research were carried out in successive stages from 2005 till 2019, and the original approximately 700-year-old paving in the chancel was a valuable discovery as well. The restoration of the chancel was awarded by the main prize of the Cultural monument of the year 2012, the artworks were renewed by M. Janšto and R. Boroš. The church logo symbolically depicts a fresco of a young maiden attacked by devils in the hell from the church nave. 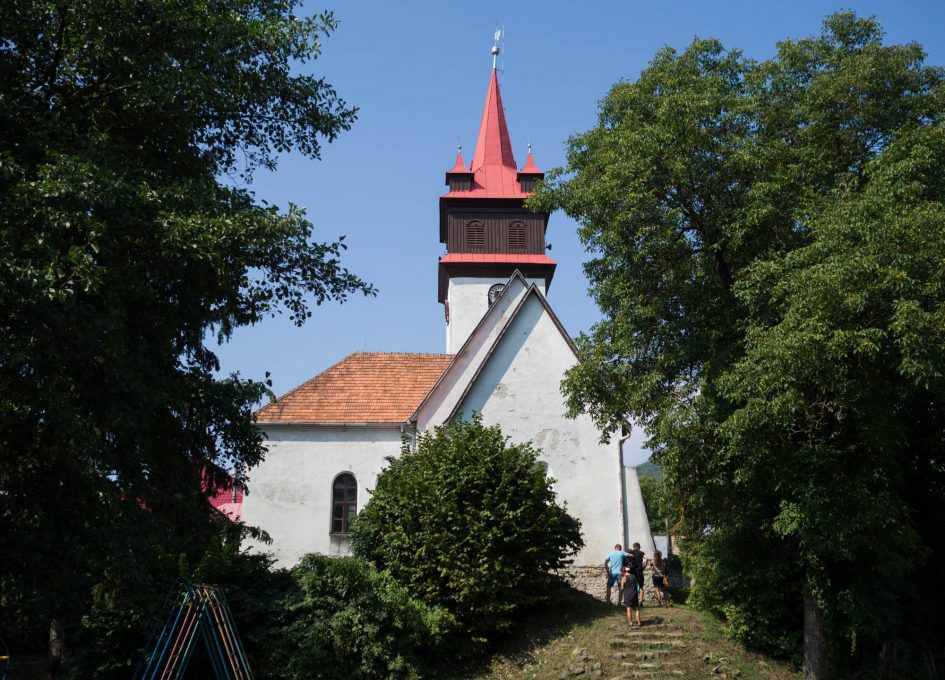 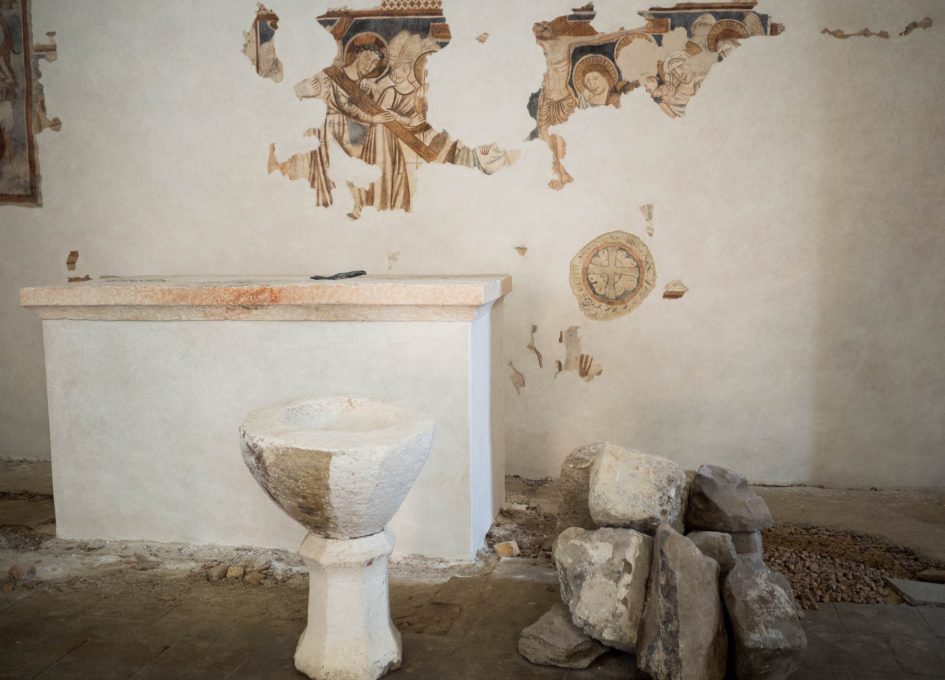 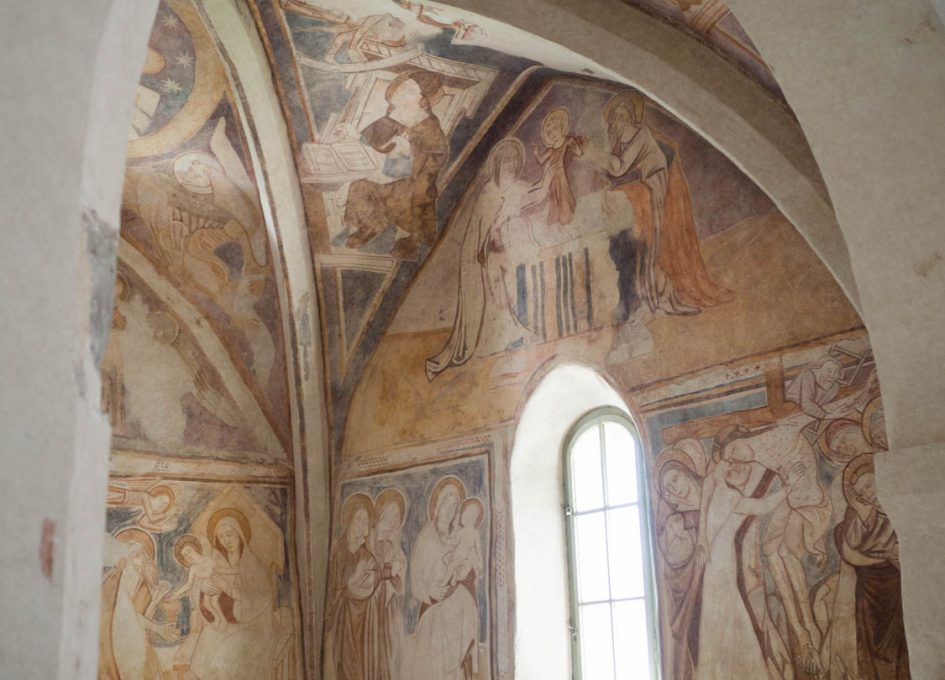 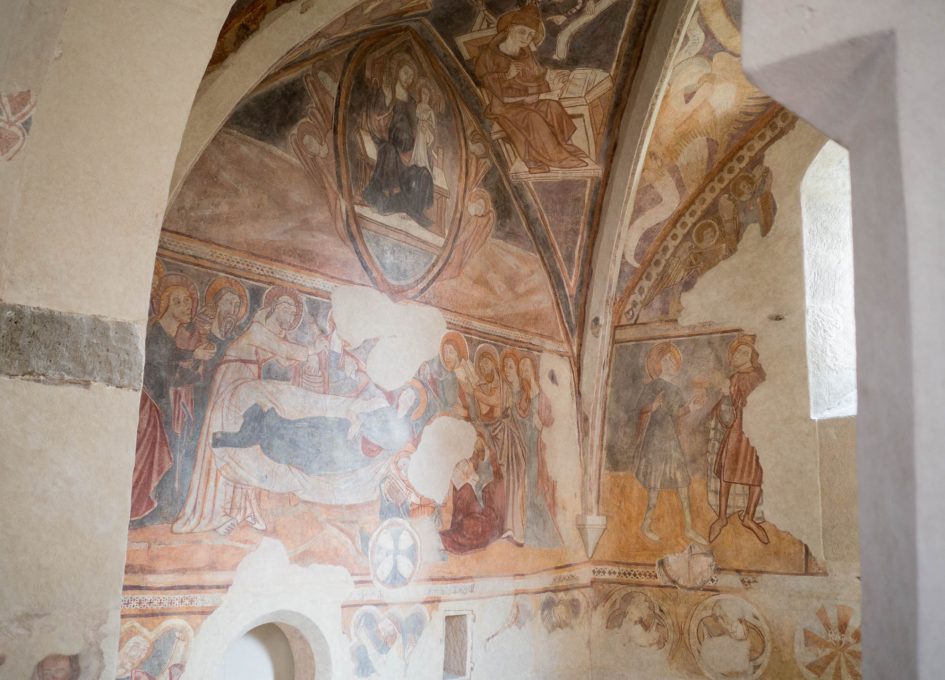 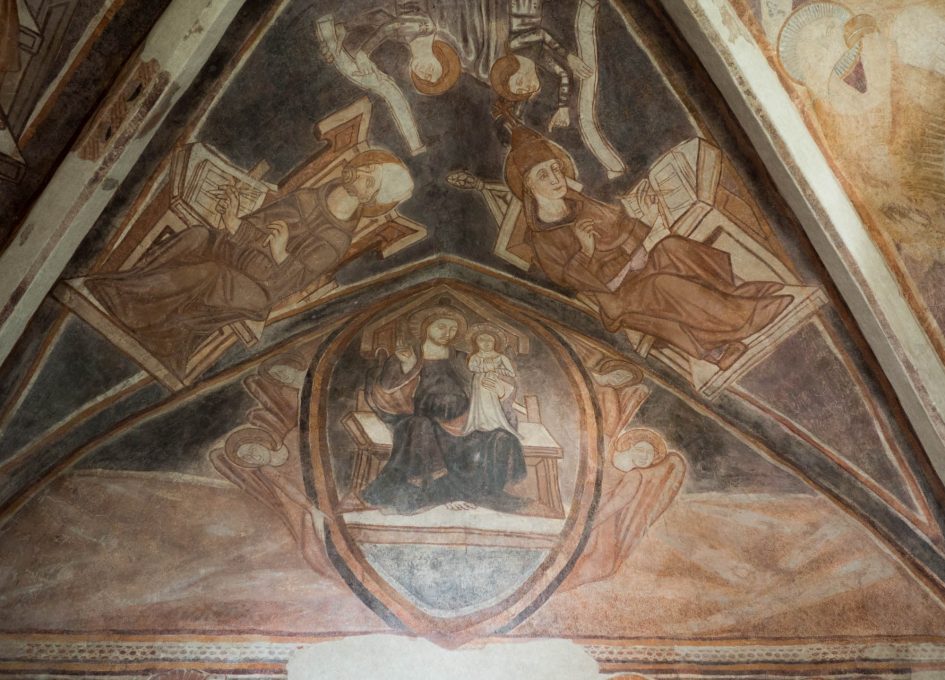 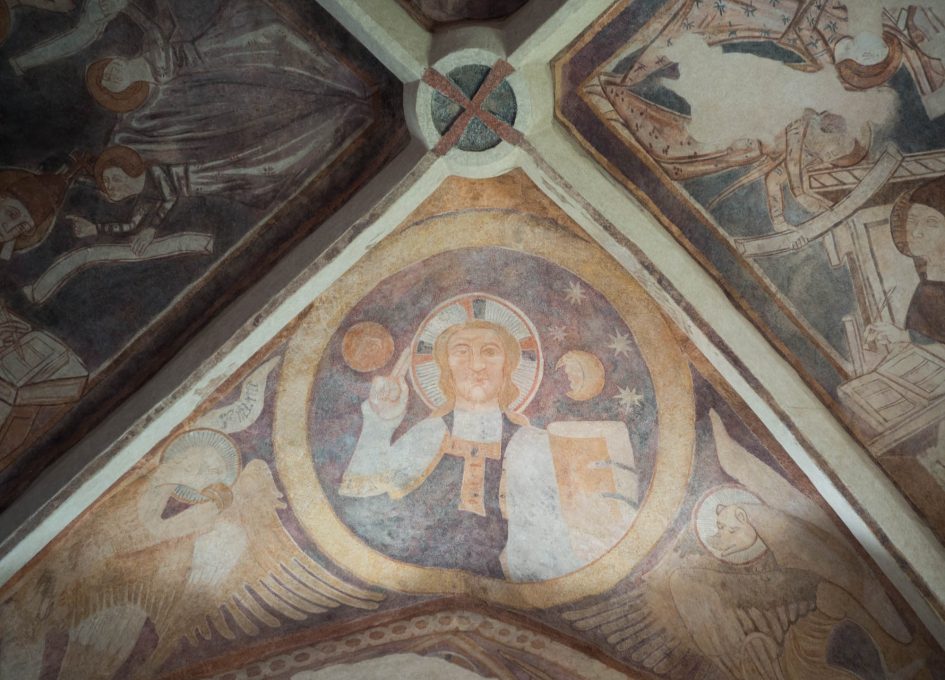 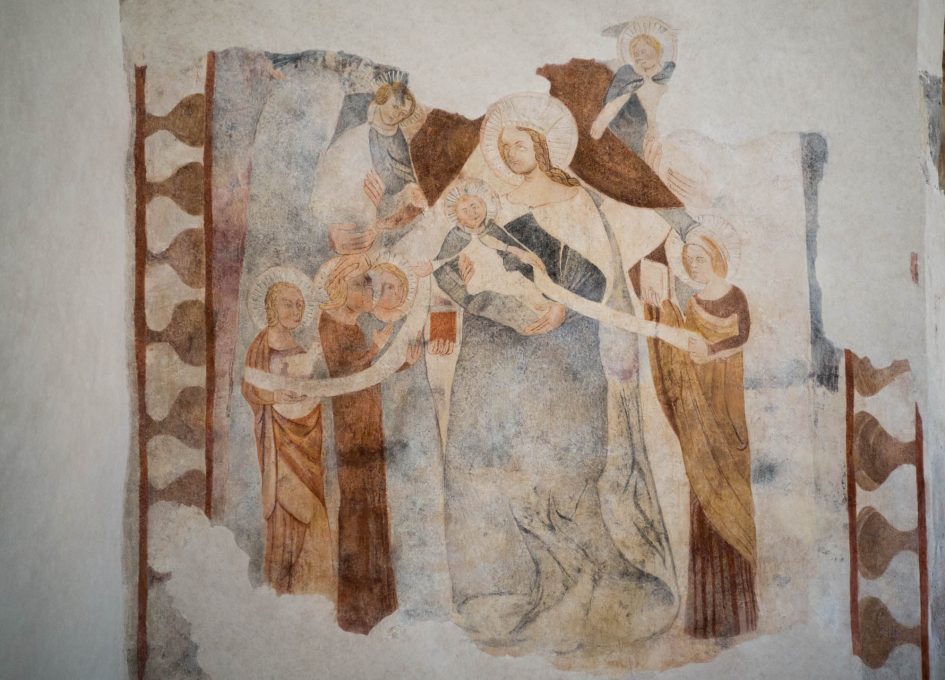 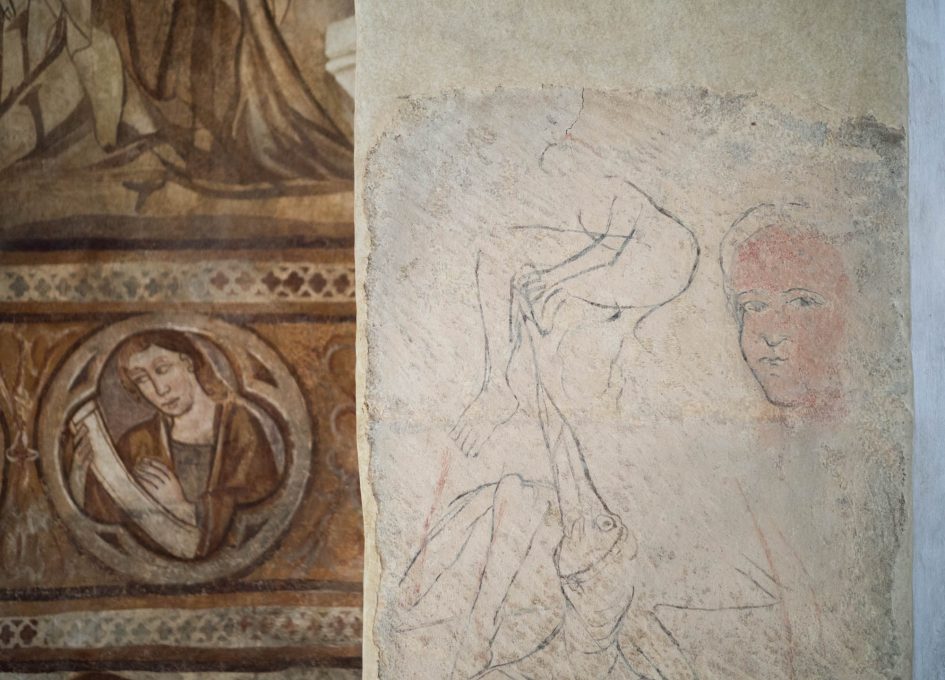 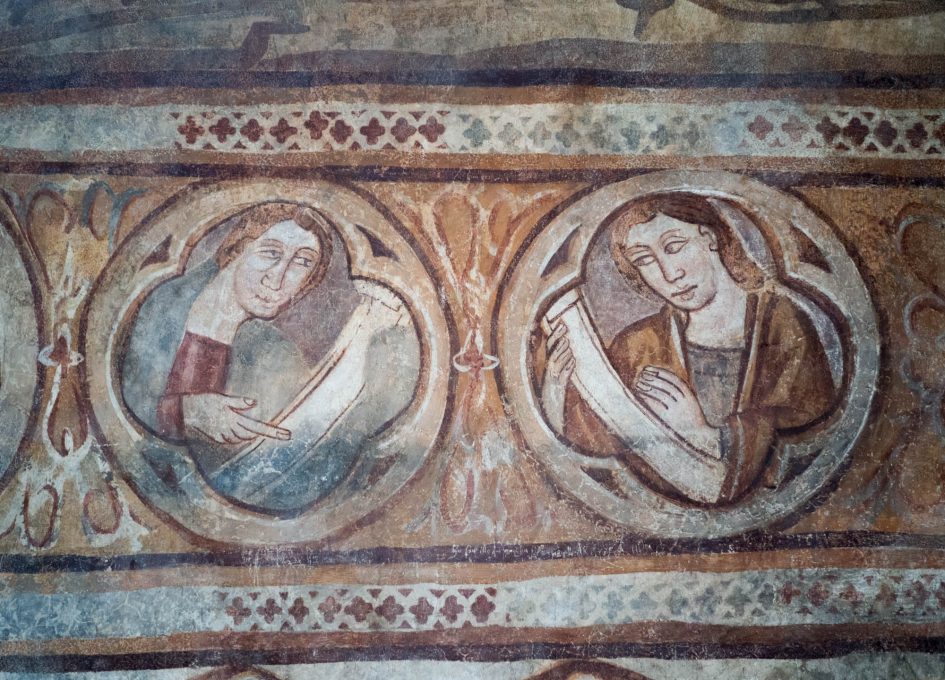 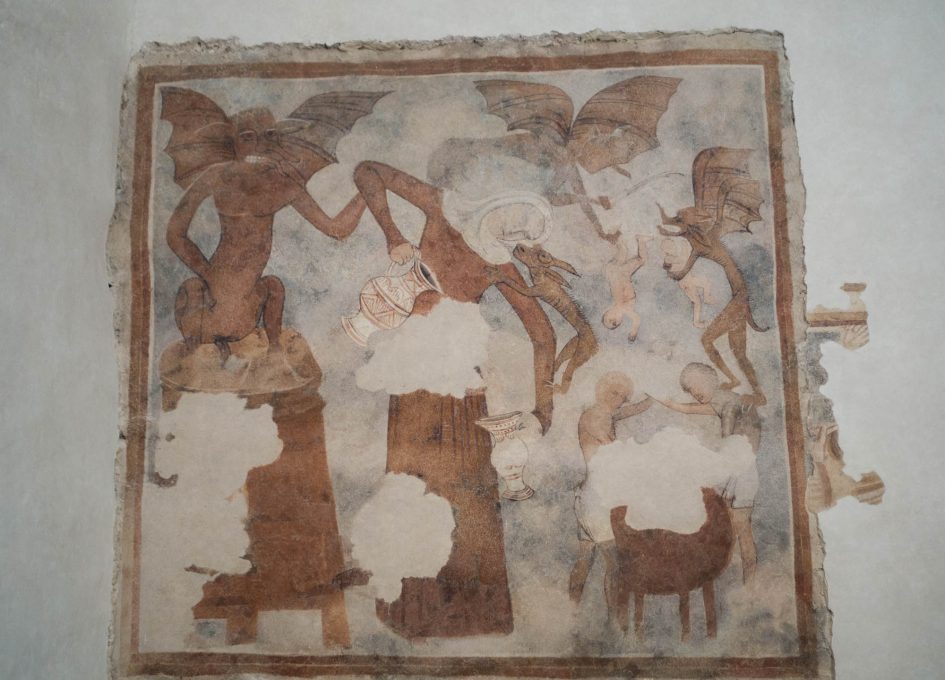 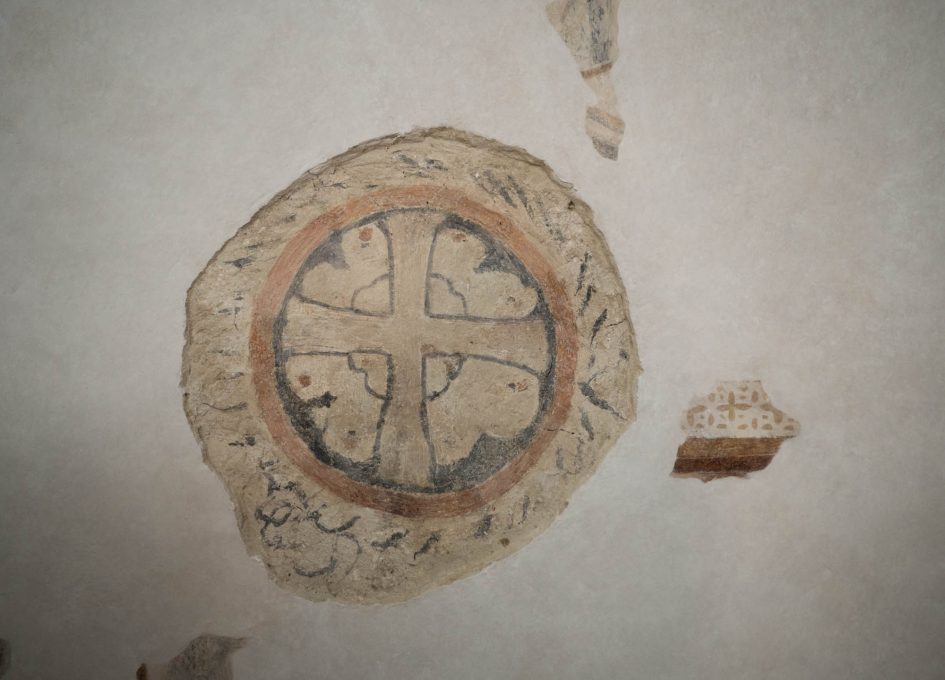 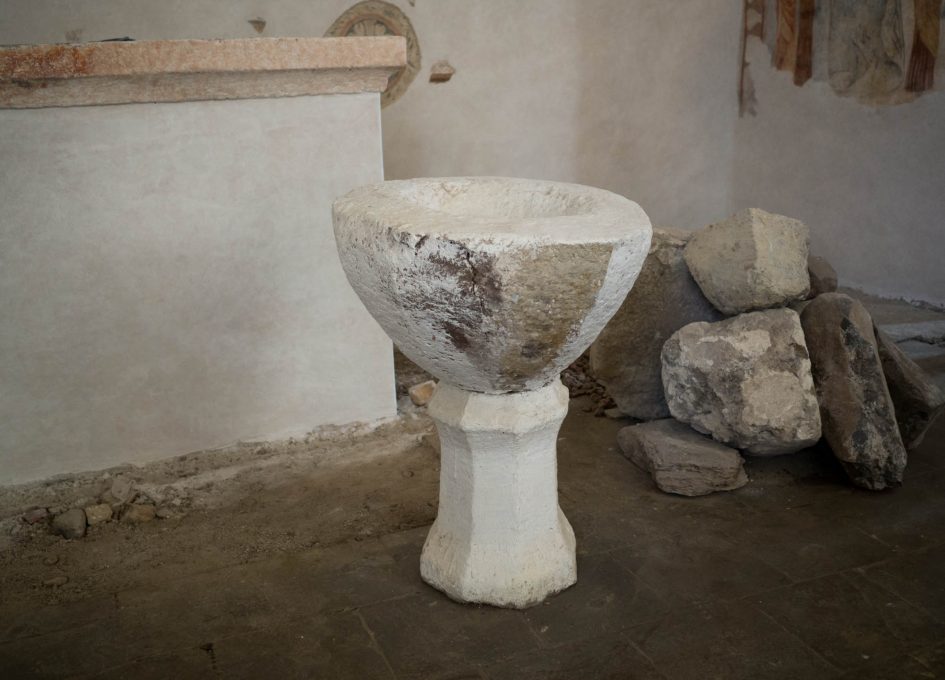