The fortified early Gothic church from the first half of the 14th century was built on the site of an older building. In the 15th century it was fortified with a wall and a wooden bell tower was built on the grounds in 1657. The single-nave space with a square-ended presbytery and a built-in sacristy has a painted cassette ceiling from 1758, the presbytery is characteristic by its rib vault. The mural paintings date back to the 60s of the 14th century and the creator of at least a part of them is the Master of Ochtiná presbytery. These interior frescoes were discovered in the early 20th century by I. Huszka who was restoring them in 1905. All the paintings, interior and exterior ones, were completely restored between 1983 and 1985 by J. Josefík, L. Székely and I. Žuch.

Within the almost intact medieval church, the murals have a uniquely strong impression and informative value, thanks to their scale and complexity of preservation. Thematically they focus on individual scenes from the Marian and the Passion cycle, but they do not have a uniform concept unlike the upper belt on the nave’s northern wall with a complete depiction of the St. Ladislaus legend. Presbytery is dominated by the Blessing Christ in a mandorla, then we can find here Abraham holding souls of blissful in a napkin, a pair of evangelists’ symbols, the Veronica&#39;s scarf with a portrait of Christ, twelve apostles, St. Peter, St. Paul and St. John, above the figures are the walls of Heavenly Jerusalem and even higher is the God the Father and Christ. On the northern wall a turret monstrance is painted, complementing the pastophorium, next to it is probably St. Thomas. On the triumphal arch the characters of St. Cosmas and Damien are visible. The inner lining of the triumphal arch is decorated with a number of half-figured prophets. From the side of the nave, the arch is made up of scenes of the Marian cycle: The Annunciation of the Blessed Virgin Mary with the figure of the Blessing God the Father and the kneeling figure of the archangel Gabriel. Author’s good knowledge of Italian artworks is revealed by a vase in the form of amphora with a lily flower and a church resembling the Romanesque Chapel of St. Francis (so-called Porciunkula) in Assisi. On the sides of the triumphal arch there is Virgin Mary the Protector and the Last Judgement, portrayed by the figure of St. Michael the archangel weighing souls. The Marian cycle continues on the nave’s northern wall through the scene of worship of the Three Kings. Here, the depiction of camels definitely catches one’s attention, as the author has never seen these animals and he visualized them as horses with humps on their backs. On the right side there is partially destroyed Pietà and St. Helena with a cross next to St. Anne with little Mary in her lap. The most dominant fresco on the northern wall is the complete St. Ladislaus legend in the upper belt. In the scene, a Cuman warrior is abducting a Hungarian girl named Ladiva from the city of Varadín. Ladislaus is starting a chase for the Cuman with the intention of saving the girl. Since Ladislaus is slower than the warrior, he yells at the girl to pull the abductor to the ground and the fight between Ladislaus and the Cuman begins. This struggle also symbolizes the fight of the Christian good versus the pagan evil. The fight ends with Ladiva cutting a Cuman’s tendon and she eventually kills him with a sword. The bloody scene alternates with a happy ending when St. Ladislaus rests with his head in the girl’s lap.

Outdoors, on the presbytery’s eastern wall, we can find a fresco of St. Christopher, the patron of travelers.

Besides medieval jewels, such as the stone 13th-century baptismal font, the church also houses valuable, mainly Renaissance and Baroque furnishing: the wooden painted choir from 1669, the altar and the pulpit from 1668 and the Baroque patronage bench from 1731.

As the logo of the church, we have chosen the very characteristic fresco of Archangel Michael weighing souls during the Day of Judgement. 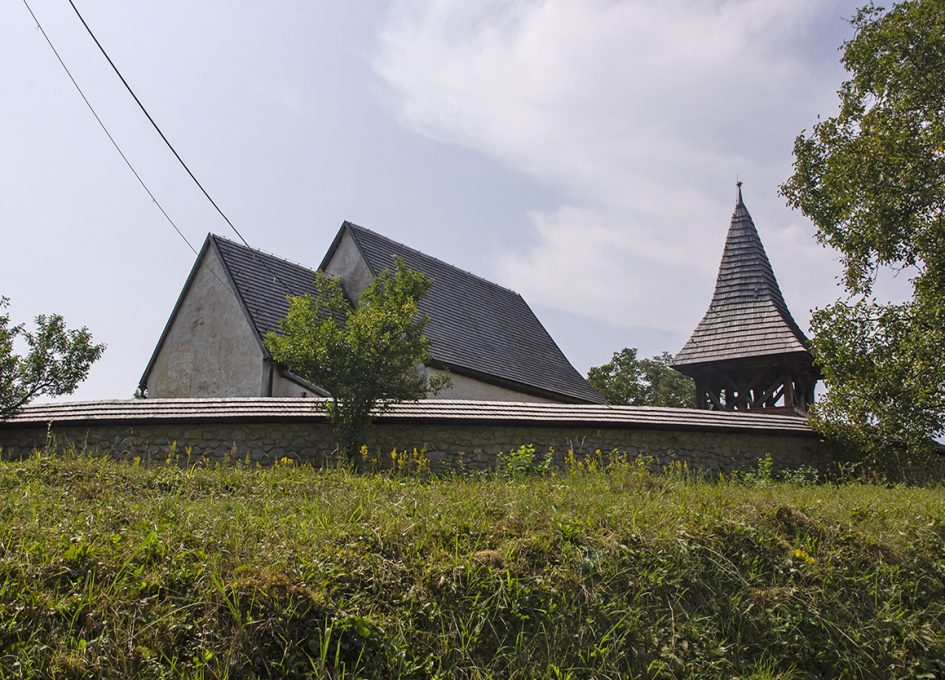 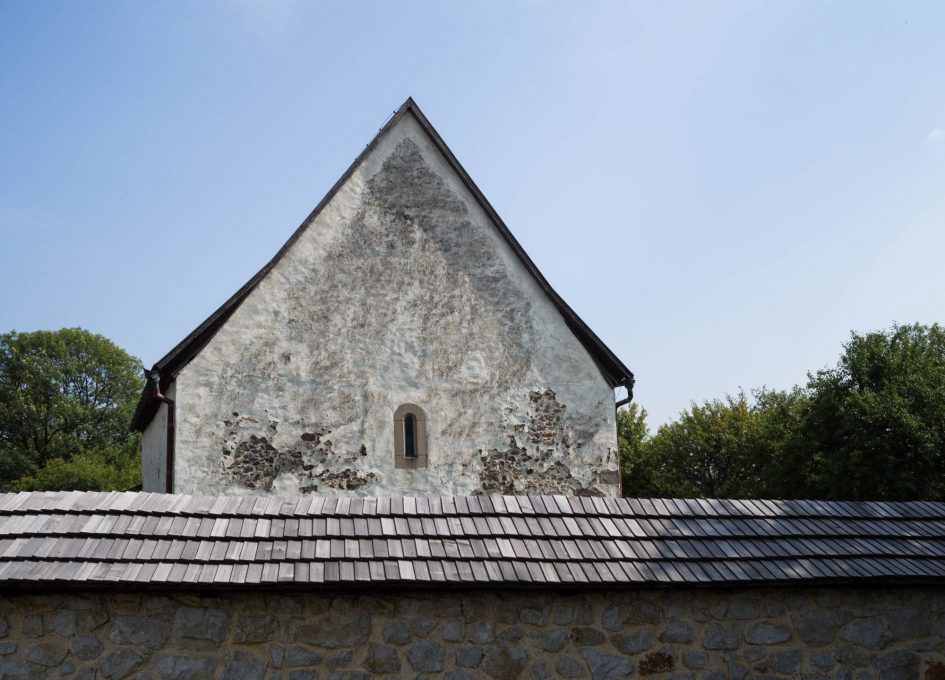 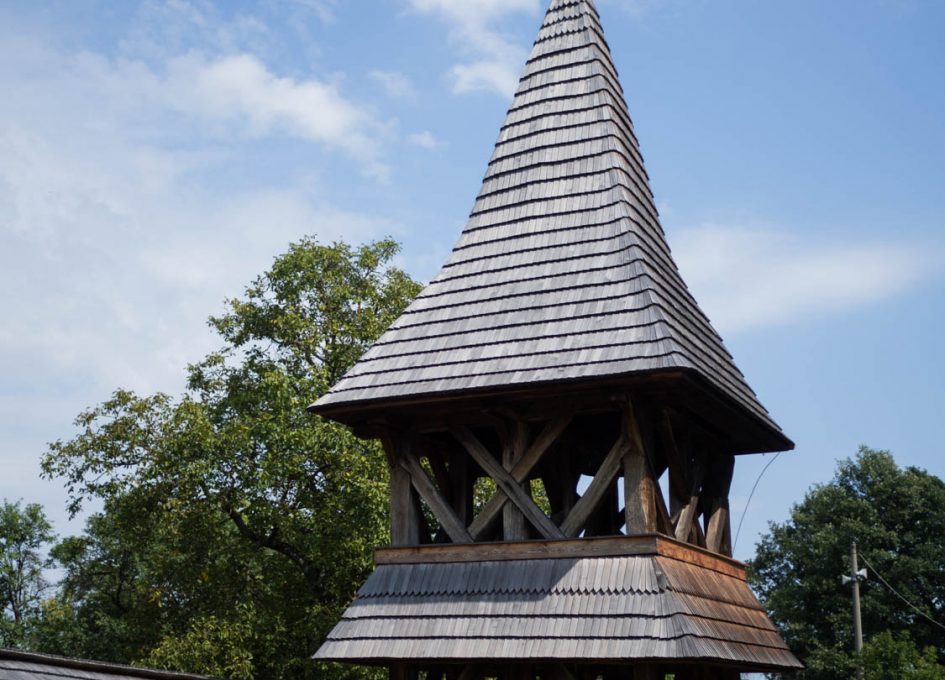 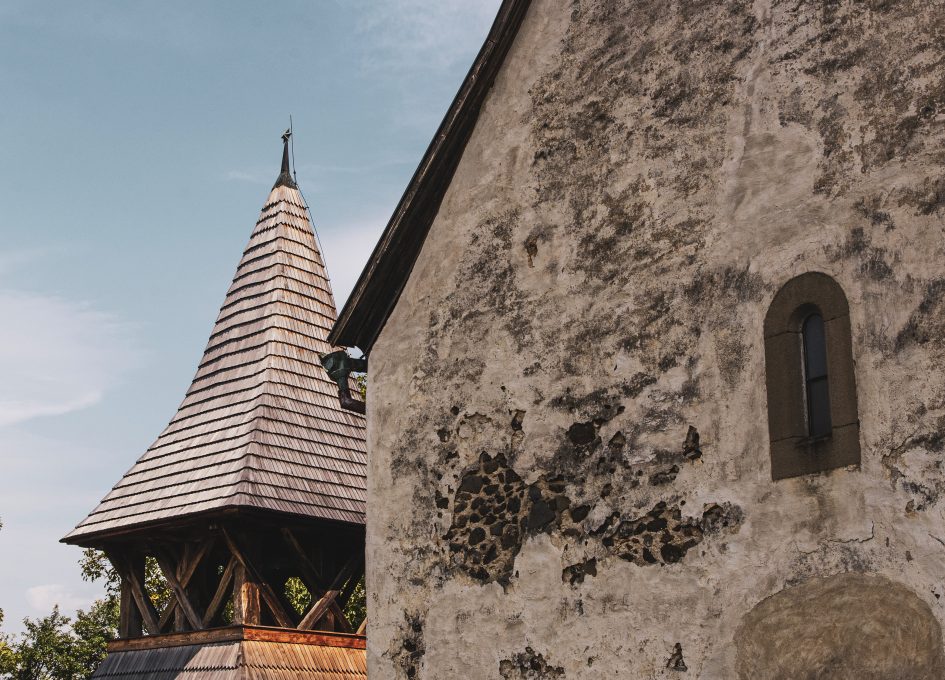 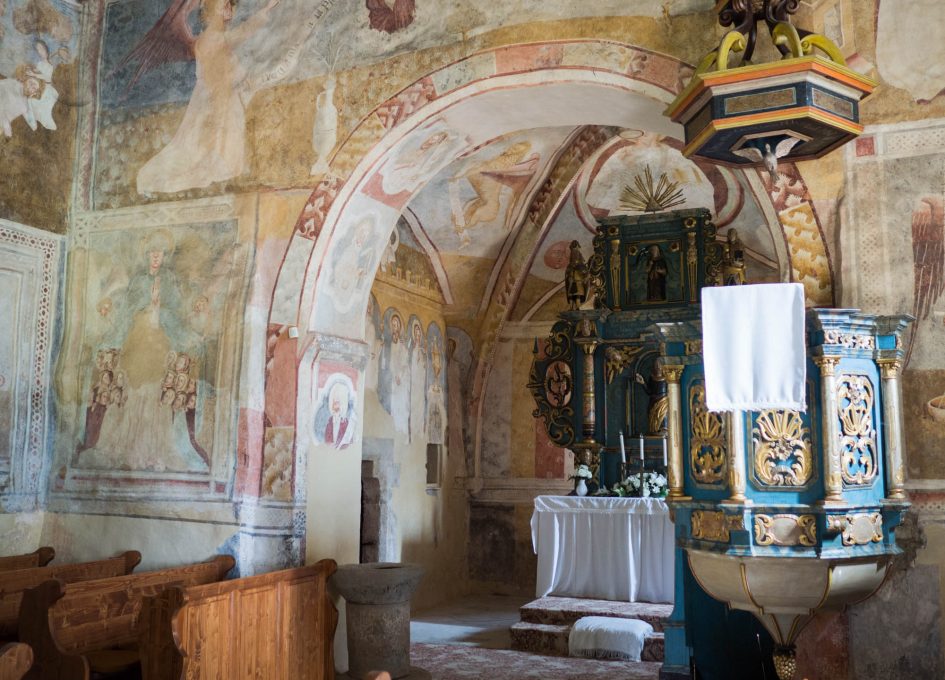 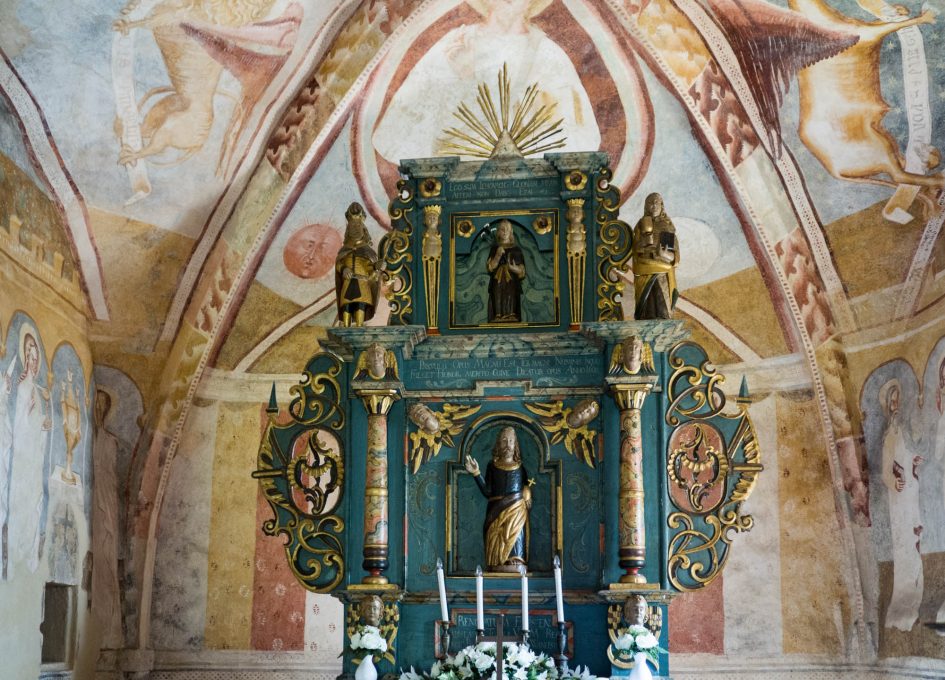 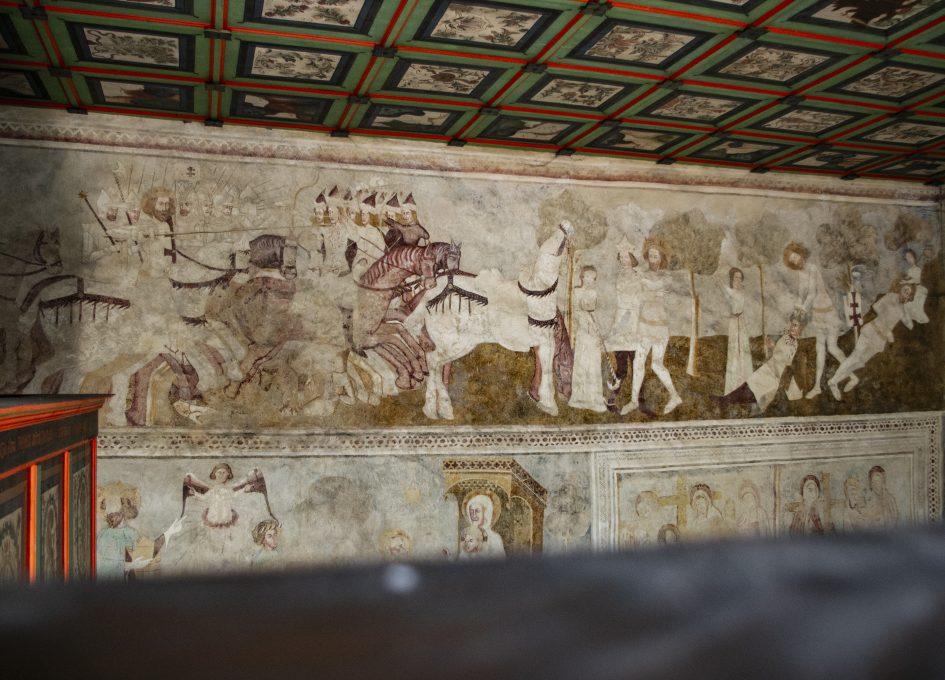 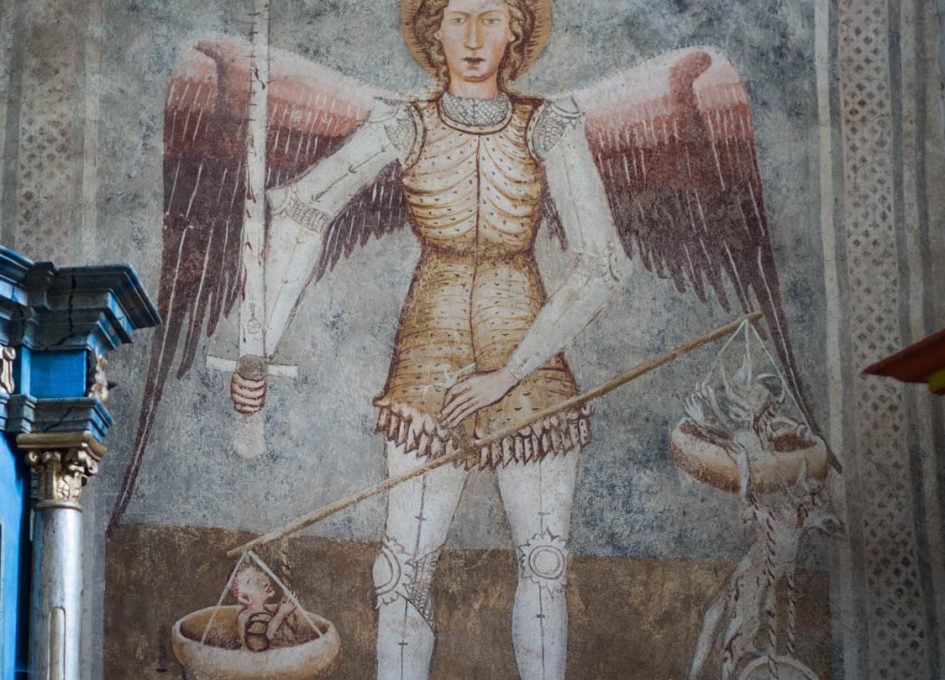 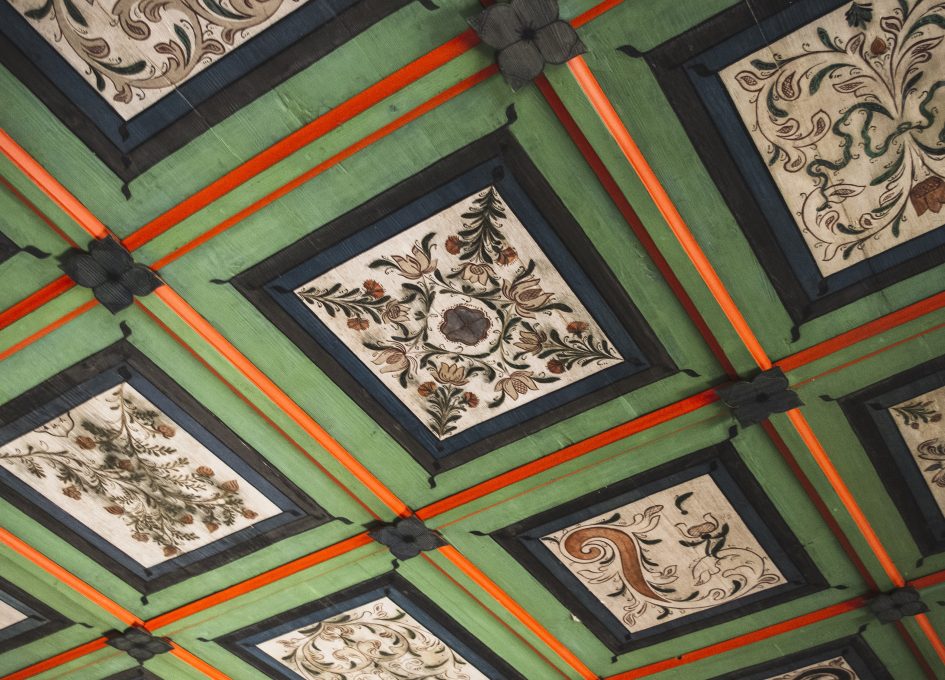